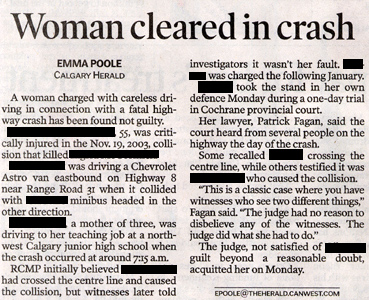 A woman charged with careless driving in connection with a fatal highway crash has been found not guilty.

The accused, 55, was critically injured in the Nov. 19, 2003, collision that killed Ingrid McCormick.

McCormick was driving a Chevrolet Astro van eastbound on Highway 8 near Range Road 31 when it collided with the accused minibus headed in the other direction.

McCormick, a mother of three, was driving to her teaching job at a northwest Calgary junior high school when the crash occurred at around 7:15 a.m.

RCMP initially believed McCormick had crossed the centre line and caused the collision, but witnesses later told investigators it wasn’t her fault. The accused was charged the following January. The accused took the stand in her own defence Monday during a one-day trial in Cochrane provincial court.

Her lawyer, Patrick Fagan, said the court heard from several people on the highway the day of the crash.

Some recalled the accused crossing the centre line, while others testified it was McCormick who caused the collision.

“This is a classic case where you have witnesses who see two different things,” Fagan said. “The judge had no reason to disbelieve any of the witnesses. The judge did what she had to do.’

The judge, not satisfied of the accused guilt beyond a reasonable doubt, acquitted her on Monday.